1、 What is single chip microcomputer?

As the name suggests, single chip microcomputer (MCU) is a micro device that can perform special tasks assigned by users. Tasks may be related to general calculations, such as addition, subtraction, division, and floating point mathematics.

In addition, MCU can also control, process and store information in memory. The memory size varies with different MCU series. In some cases, they are often referred to as "microcomputers on chip". The building blocks of single chip microcomputer are processor, memory and peripheral equipment. Let's discuss it in detail.

The following figure is the internal view of MCU architecture. 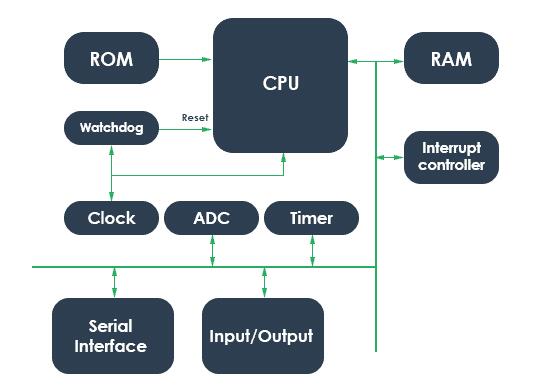 Basically, CPU is the core of MCU. It is the brain that follows the actions given by the user. The CPU obtains instructions from memory (ROM), decodes them and executes them. This technology is called pipelining. Pipeline operation is completed with the help of data bus and address bus. The CPU runs instructions at megahertz (MHz) or gigahertz (GHz).

Input / output ports are commonly referred to as GPIO (general purpose input / output) ports. This means that these ports can be used as inputs or outputs. Some micro MCU support standby GPIO. They can be used for a variety of functions. They are required when connecting display devices (LED, LCD and touch screen), motors and other external devices. I / O ports are also used for input sensing and switching purposes.

Timer is the most innovative peripheral, which can produce accurate time delay. It can repeat predefined tasks over a known period of time. Some applications of timer include motor control, on / off relay circuit, GPS (Global Positioning System), home appliance control, etc.

Counter is a kind of peripheral device, which is used to count events that occur outside MCU. The application of counter includes pulse measurement, object detection and so on. They are used for frequency measurement, calculating the temperature rise or fall in the microwave oven, and measuring the set time in the washing machine and electric heater.

In electronic products, different devices communicate with each other using serial communication. In order to realize serial communication, UART (universal asynchronous transceiver), I2C and SPI are used. Moreover, advanced protocols such as Ethernet and USB have also appeared in the latest single chip microcomputer.

It has an internal clock, which can measure the clock cycle fed by MCU and use its own clock for sampling. The number of clock cycles represents a digital representation of the analog voltage.

DAC (digital to analog conversion) is opposite to ADC. DAC converts digital data into analog voltage form. Some applications of DAC include digital signal processing, motor control, music player, digital potentiometer and so on.

An interrupt is an event that can complete multiple tasks. When the call is interrupted, the MCU stops the current execution (the first task) and executes other tasks (the second task). After completing the second task, it returns to the first task and performs normal operations.